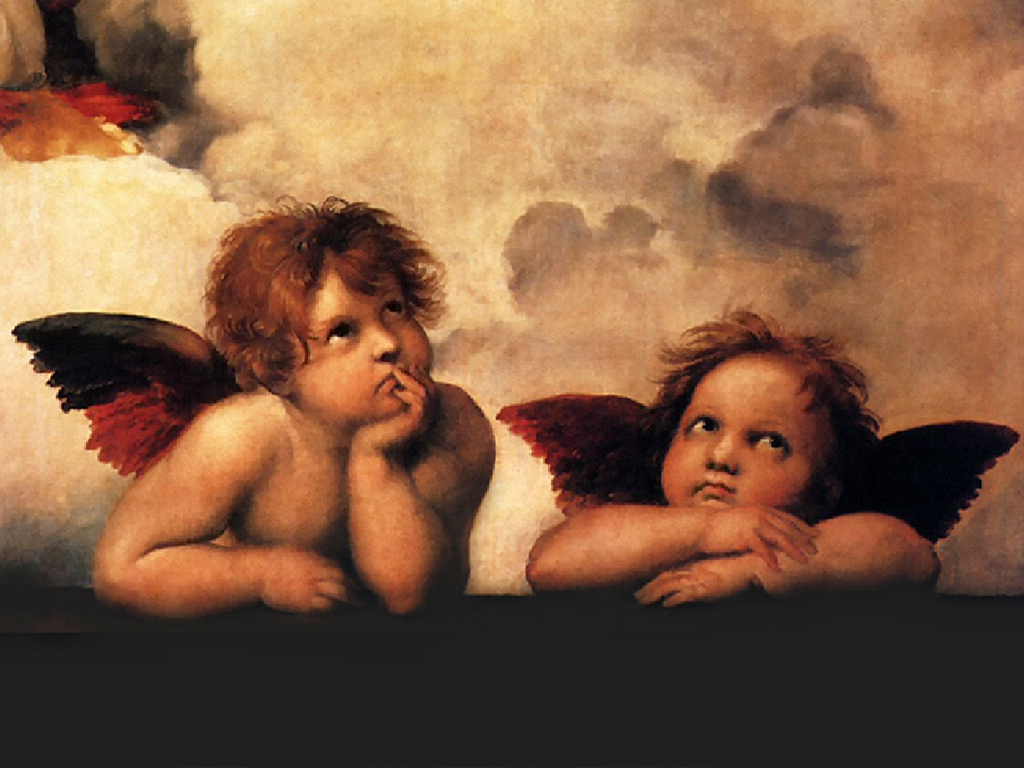 Angels are a national industry. It is easy to find images of them in statuettes, lapel pins, and holy cards. They convey assurance and holiness to many people. Yet a moment’s reflection upon the biblical witness to angels reminds us that they are about much more than the sweetness of a beautiful face with wings.

A scripture passage, Isaiah 40:1-11, is often associated with the season of Advent. It begins with the famous line: “Comfort, comfort my people, says your God.”  What might not be immediately apparent to the reader is that in the Hebrew God’s word of comfort is plural. It thus describes an address to some group. The group is one of angels. There is a long tradition in the Hebrew Bible that God reigns in the midst of a heavenly council of angels. The First Book of Kings 22:19 describes such a scene: “I saw the LORD sitting on his throne, with all the host  of heaven standing beside him to the right and to the left  of him.” The biblical tradition, therefore, presents God’s will as being mediated to humans through the activity of spiritual beings. The words of comfort for which Isaiah is so famous are words of command from God to his angels. The angels are to bear the news of God’s good favor to earth.

In the bible the description of God’s heavenly council draws heavily from the councils of the earthly rulers of the Ancient Near East.  The biblical authors were convinced that if their local rulers had subordinate ministers to execute their will, then certainly God who is ever so much more exalted should have similar servants. The good news for us who inherit this angelic tradition is that the nature of the ministers reflects the nature of their Lord. Because our God is both just and loving, the message that God’s ministers bring to us will be to our benefit. We can expect that the angelic word to us will be one of comfort.

Because angels are messengers of God’s presence to us, their actions in the bible portray God’s justice, love and protection. God is just, and many times the bible presents angels executing God’s justice. An angel of the Lord inflicts punishment upon the Assyrians who seek to invade Jerusalem (2 Kings 19:35). Seven angels pour out the wrath of God upon the wicked of the earth in chapter 16 of the Book of Revelation.

But God’s love is also revealed as angels announce the great events of salvation. Angels announced the births of Ishmael (Genesis 16:11) and Samson (Judges 13:3-5). It is an angel who announces the birth of John the Baptist (Luke 1:19), the birth of Jesus (Luke 1:26), and Jesus’ resurrection (Matthew 28:5).

God’s protection is the quality which the angels most clearly portray. An angel stops Abraham from sacrificing Isaac (Genesis 22:11); protects Jacob from harm (Genesis 48:16); shields Israel from the Egyptians at the Red Sea (Exodus 14:19). An angel warns Joseph to flee to Egypt (Matthew 2;13); comforts Jesus on the Mount of Olives (Luke 22:43); an releases Peter from prison (Acts 12:7). Because angels reflect God’s protection, there arouse a belief that each person has an angel to watch over him or her. Psalm 91:11-12 tells us that God will “command his angels concerning you to guard you in all your ways. On their hands they will bear you up, so that you will not  dash your foot against a stone.” Jesus tells his disciples  “Take care that you do not despise one of these little ones;  for, I tell you, in heaven their angels continually see  the face of my Father in heaven” (Matthew 18:10).

The importance of angels is reflected in the Catholic Liturgy. The first Eucharistic Prayer asks, “In humble prayer we ask you, almighty God: command that these gifts be borne by the hands of your holy Angel to your altar on high in the sight of your divine majesty.”  Many prefaces of the Church year end with joining our voices with those of the angels. The Funeral Liturgy prays on behalf of the deceased, “May the angels lead you into paradise . . .”

There has been concern throughout Christian history that the respect we direct towards angels should not compete with the worship which we give to God alone. St. Augustine is credited with the most useful explanation of how to keep the proper perspective. He teaches that we venerate angels “out of charity, not out of servitude.” Angels are messengers of God’s presence. They are not intended to be an object of fascination in themselves but a reflection back to the love of the One who sends them. If angels do not lead us to a deeper commitment in our relationship with God, they have failed utterly in their mission.