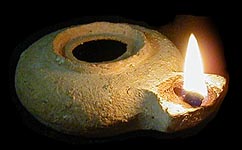 There are certain passages in the New Testament that pull against the grain. They seem to contradict a central teaching of Jesus, a central part of the gospel. But their purpose is not to negate that teaching but, instead, to balance it and place it in a clearer perspective.

Today’s gospel of the ten virgins is one such passage. Its setting is a Jewish wedding feast. The ten virgins are friends of the bride or groom, and they play a specific role in the Jewish wedding ritual. Their role is to accompany the bride and groom in procession as the bridegroom takes the bride into his own home. Because this happens at night, the virgins are meant to carry lamps of oil to illuminate the way. So the virgins in the gospel are comparable to bridesmaids today. They have a specific role to play in the wedding ceremony. They have been chosen for this role, and everyone is depending upon them to fulfill their responsibilities. The problem in the story is that five of these virgins were wise and five were foolish. That is, five of them prepared themselves for their role and five of them did not.

The wise virgins, knowing that anything could happen at a wedding, decided to bring some additional oil with them so that they could assure that their lamps would be burning for the procession. The foolish virgins did not worry about such preparations. Their attitude was, “We will deal with that when the time comes.” Well, the time came. The groom was delayed. When it was time to perform their role in the ritual, the foolish virgins found that their lamps were going out.

Now, this refusal by the wise virgins to share might surprise us. Clearly these virgins are meant to be an example to us. Their decision not to share their own oil runs against the grain of the gospels. It is not what we expect. If you were to stop someone on the street and ask them, “What do you know about Jesus?” or “What does Jesus tell us about relating to others?” nine times out of ten the person would say, “Jesus asks us to love our neighbor, to care for the poor, to give of ourselves for the sake of the other.” That response is correct.  Just two weeks ago we heard Jesus’ great commandment. He told us that we are to love our neighbor as ourselves. And if you ever asked that famous question, “What would Jesus do?” almost always the answer comes that Jesus would give of himself. Jesus would sacrifice himself for the sake of the other. This attitude is central to the gospel. This is why it might shock us when the wise virgins act in exactly the opposite way. When they are asked to share their oil, they say no. When the foolish virgins ask them for help, they refuse.  In fact they tell them to go and find their own oil, and then they continue on with their business.

What are we to make of this response? The refusal of the wise virgins to share is not telling us that we should dismiss the command to love our neighbor. But it is reminding us that love is not always giving our neighbor what he or she asks of us. If our neighbor is irresponsible or manipulative or destructive, we have every right to refuse the request and to protect ourselves. If we are dealing with someone who is abusive—verbally, mentally or physically—if we are dealing with someone who is addicted to drugs or alcohol, we are not required to allow that destructive behavior to continue, even if the person asks us to. We have every right to say, “Unless you are willing to change, this relationship is coming to an end.”  When we have to deal with someone who has lied to us and hurt us time and time again and expects us to cover for their irresponsibility, we do not need to feed their dysfunction. What would Jesus do in that circumstance?  In that circumstance, Jesus would say, “We are not going to play this game any longer. I cannot give you what you want.”

The example of the wise virgins in today’s gospel is an important example to consider seriously. Yes, we are called to love our neighbor. But there are times when that love needs to be tough. At times we need to be strong enough to say to our neighbor, “What you are asking of me is foolish and destructive and I will not give it to you. I love you but I will not help you. You are on your own.”