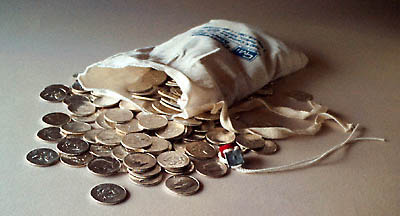 Here’s my reasoning. First of all, we have to understand the kind of money the parable is addressing. In Jesus’ day, a talent was roughly a million dollars. So the master gave the first servant five million, the second two million, and the third one million. That is eight million dollars altogether. Clearly, this master was a wealthy man. How did he get this way? The third servant tells us. He describes his master as a demanding person who harvests where he did not plant and gathers where he did not scatter. This master was a demanding person towards himself. The minute that he received money, he began at once to invest, buy, sell, and leverage to make more money. This is how he accumulated the eight million dollars to entrust to the servants.

The key to this parable is that the master never tells any of the servants what to do with the money he gives. He simply divides it up and leaves. Yet, the first two servants go out immediately and begin to invest, buy, sell, and leverage to make more money. How did they know that they should do this? They know because they were paying attention. They had watched what their master was doing. They could see that their job was to do what the master had done, to carry on his work. The third servant is clueless. He decides he is going to bury the money because he was not paying attention. All three of these servants grew up in the same household, a household in which the purpose of money was to make more money. The first two servants understand this. The third does not, and that is his downfall.

This parable, then, calls us to carry on the work of our master. Our master is not the master in the parable whose purpose was to make more money. Our master is the Lord. So for us to understand what the Lord’s work is we need to pay attention like the first two servants. We need to recognize what our Lord is doing so that we can do the same.

Parents need to be attentive to their children, to discern what God has begun in each one of them. If a son or daughter is a compassionate person, then it is the role of the parent to see that that compassion matures and grows. If a child is insightful, then a parent should try to foster wisdom to enlarge the child’s intelligence. If a son or daughter is joyful, then the parent’s work is to teach the child how to spread that joy around. Then when Christ comes, the parent will be able to say to him, “This is what you gave me, and here is how I made it grow.”

We need to be attentive to what God is doing in our own lives, what God has planted in our hearts, what is changing, growing, maturing. The minute we see that God has begun to do something, it is our role to support that growth so that it increases. In this way we may become a more confident person, a more humble person, or a more generous person. So that when Christ comes, we can say, “Look. Here is the way that I continued the work that you started.”

We need to be attentive to what is happening in our families, on our job, or in our neighborhood so that we can see what God is trying to bring forth. Once we recognize God’s action, we should commit ourselves to foster that development so that the world around us can be more cooperative, more forgiving, more just. Then when Christ comes, we can say to him, “Look. You gave me five. Here is another five back.”

Our calling is not just to do what we think is best but to discern what God is doing so that we can make it grow. That is why we must be attentive to what God is about in our hearts, in our families, and in our world. When we recognize that God’s action is present in this or that situation, then we, like the first two servants in the parable, must begin to move that work along. Then, when Jesus comes, he will say to us, “Well done, good and faithful servant. Enter into your master’s joy.”