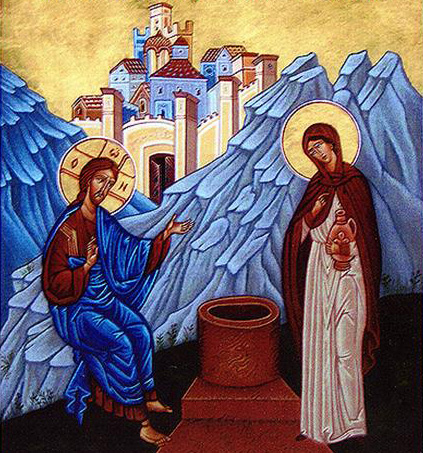 Most of chapter four of John’s gospel recounts the meeting between Jesus and an unnamed woman. The encounter takes place in Samaria, a region of Palestine, north of Judea. The area was named after the city of Samaria which served as the capital of the northern kingdom of Israel. In 722 BCE Samaria was destroyed by the Assyrians who deported many of its people and settled captives from foreign nations in the region. The descendants of this mixed population became the Samaritans of Jesus’ time.

Jesus meets the Samaritan woman at Jacob’s well. This information might seem to be merely setting the scene. It is, in fact, doing much more. If we were to examine the Hebrew Scriptures we would discover that many central characters of Jewish history met their wives at a well in a foreign land. Abraham’s servant found a wife for Isaac at a well in Nahor (Genesis 24:10-61). Jacob met his wife, Rachel, at a well in the land of the East (Genesis 29:1-20). Moses met his wife, Zipporah, at a well in Midian (Exodus 2:15-21). So when Jesus sits down at Jacob’s well in Samaria and a woman comes forward to meet him, we are being told that this woman would become his wife.

“Wait a minute!” you say. “Jesus was not married!” You are correct on a physical level. But one of the characteristics of the Gospel of John is that it tells the story of Jesus on several levels. In today’s gospel John uses this common betrothal scene at the well to tell us that Jesus and the woman are entering a new spiritual relationship. This is why the conversation between them turns to what is true worship and why Jesus reveals that he is the Messiah. When she believes in him, it becomes clear that the union which began at the well was a spiritual marriage between this  woman and her Lord.

There are several places in this story where John uses a physical reality to point to a spiritual one. This dynamic is regularly accompanied by misunderstanding. Someone listening to Jesus grasps  the physical meaning but misses  the higher one.

Jesus tells the woman that he can give her “living water.” She assumes that he is speaking about the water in the well and wonders how he can offer that water since he has no bucket. However, the water of which Jesus speaks is of a higher level. It is the living water of his gospel which leads to eternal life. Jesus tells the woman to call her husband. We assume that he is talking about a physical marriage union with a man. But Jesus is aiming higher. This becomes clear when he tells her she has had five husbands. The Book of Second Kings (17:30-31) tells us that the Samaritans worshiped five false gods. Therefore, Jesus is telling her that these former spiritual relationships were of no value and inviting her to accept him as her Lord. When the disciples return they want Jesus to eat something. Yet he tells them he already has food. They misunderstand, thinking of physical food. The nourishment of which Jesus is speaking, however, is spiritual food: doing the will of his Father.

Throughout this gospel John is calling us to a higher level. He invites us to look beyond the mere appearance of things and realize that what really matters occurs at the spiritual level where Jesus is the way, the truth and the life.

It is easy to read the scriptures imagining that we are simply reading an account of “what happened.” From this orientation the setting at Jacob’s well would be merely providing us with geographical information. To limit ourselves in this way, however, blinds us to the symbolic nature of many biblical texts and how frequently the authors of scripture use literary connections to convey their meaning.

When we approach the Bible aware that there are several layers of meaning in every text, we begin to understand that the scriptures contain many avenues to lead us to the Good News of our salvation.