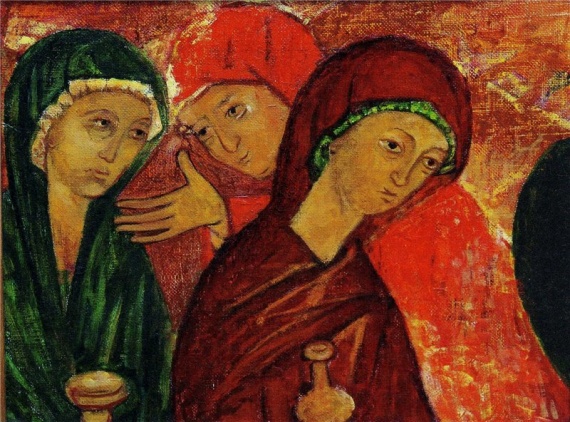 There are more women than men in today’s gospel, and that is unusual. The culture in which Jesus lived was dominated by men. Both politically and religiously, men were in charge. After Jesus’ death and resurrection, the New Testament was written by men from a male perspective. So the presence of so many women within today’s gospel is significant.

The gospel begins with two men, Jesus and Simon the Pharisee, dining at Simon’s house. Then the first woman enters. She is a public sinner and she bathes Jesus’ feet with her tears in repentance. Jesus proclaims her forgiveness. Jesus action towards this woman is not unusual in the gospels. During his ministry he forgave many sinners both men and women. It is logical that the evangelists would preserve these stories to affirm that Jesus had a clear commitment to the marginalized and the sinful. But it is the women who come into the story next who are striking. There are three of them and they are mentioned by name: Mary Magdalene, Joanna and Susanna. These women are not public sinners. They are disciples. The gospel tells us that they traveled with Jesus and supported him through their resources. Now there are several places in the New Testament where we find a listing of the names of Jesus’ male disciples. But it is in this passage that we discover the list of his female disciples. The list reveals to us that these women were very important. They were so important that their names could not be left out, even though the male writers of the New Testament were not naturally inclined to include them. This list of female disciples verifies for us that the community that followed Jesus throughout his ministry in Galilee and Jerusalem was a community of both men and women, a community in which women played an equal role with men in supporting Jesus’ mission.

So since there are so many women in today’s Gospel, it would be useful for us to ask what do they tell us about being disciples. What qualities do they demonstrate which can help us follow Jesus? I would suggest to you there are two: courage that flows from love and generosity that flows from commitment.

The woman who approached Jesus in Simon’s house had courage. Jesus did not know her. Yet she risked approaching him in a public space and ministering to him. She knew there was a possibility for Jesus to turn her aside and reject her. Her action demanded courage. But she found that courage from her love—the love that she had for Jesus in the goodness that she could see in him, the love she had for herself in what she might become were she to find forgiveness. This woman found courage from her love, the courage to act. Where do we need courage with the people we love? Do we need courage to say to our spouse, “You know, it’s not working. Something needs to change.” Do we need courage to say to a friend that their misuse of alcohol or drugs is hurting and even destroying him or her? Do we need the courage to say to some member of our family, “Your constant words of criticism and prejudice are unacceptable. They need to stop.” It is not easy to speak the truth to those we love. But if we follow the example of the nameless woman who anoints Jesus’ feet, we will draw from our love to find the courage to act.

But courage is not the only example that we see in today’s Gospel. Mary Magdalene, Joanna and Susanna give the example of generosity that flows from commitment. The gospel is very clear that these women supported Jesus’ ministry through their presence and financial offerings. (I could add that there is no place in the New Testament where men disciples are said to support Jesus through their financial offerings!) What makes these women so generous? They are committed to Jesus’ mission. These are women who heard Jesus preach, who understood the gospel and accepted it. They wanted it to succeed. So they did not simply accept it in their hearts and pray about it. They generously chose to offer themselves and their resources in Jesus’ service. What in our lives are we are committed to, in what do we believe? Do we allow our commitment and belief to lead us to generosity? We believe in our children. Are we generous with our presence and our time to make sure that they know our wisdom and our love? Perhaps we belong to some group that is important to us. Are we generous with our time to mentor younger members so that they can carry on once we are gone? Perhaps we are committed to a better world. Does that commitment translate into the generosity of helping the homeless and the sick, of protecting the environment?

The women in today’s gospel are not idle. They come to us with a courage that flows from love and a generosity that flows from commitment. Since women seldom hold center stage in the gospel stories, today should be the day when all of us, men and women, recognize the witness of Jesus’ female disciples and follow their example in our lives.

1 thought on “Bring On the Women!”