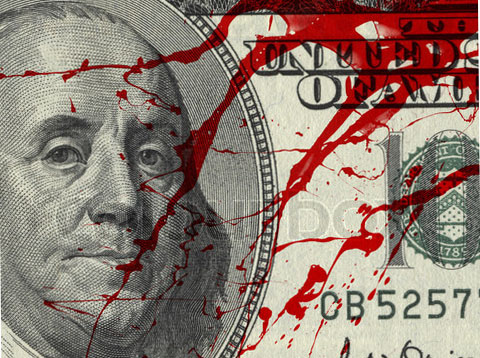 “If it bleeds, it leads.” This cardinal rule of media promotion can be verified by any consumer of current events. Stories of murder, assassination, and conflict make the front pages of newspapers, the covers of magazines, and the first stories on the evening news. People are immediately interested in violence. Nothing seizes our attention like blood.

Unless it’s money. When it comes to power and corruption, we assume that money is involved. “Follow the money” was the tip which eventually unraveled the Watergate conspiracy. When huge sums of dollars are exchanged, when under-the-table transactions are exposed, we are riveted to the story. Few things interest us as much as money.

Unless it is the paranormal. Events we cannot explain intrigue us and fuel discussion. Occurrences which contradict the rules of science or reason demand our attention. The popularity of such shows as The X-Files and Unsolved Mysteries illustrate the ongoing hunger for what is unusual. The paranormal sells. Its claims engender immediate interest.

Blood, money, and the paranormal spur instant curiosity. They are the bread and butter of any storyteller and a boon for any promoter. Yet many readers of the Bible are surprised to discover that Matthew’s passion account contains a strain of material characterized by these three elements. This article will identify this material, suggest its origin, and evaluate its dangers and benefits.

Matthew’s Unique Material and Its Origins

There are five scenes in Matthew’s passion account which are unique to his gospel. When they are read together, it becomes obvious that they are characterized by an interest in blood, money, and the paranormal.

27:3 When Judas, his betrayer, saw that Jesus was condemned, he repented and brought back the thirty pieces of silver to the chief priests and the elders. 27:4 He said, “I have sinned by betraying innocent blood.” But  they said, “What is that to us? See to it yourself.” 27:5 Throwing down the pieces of silver in the temple, he departed; and he went and hanged himself. 27:6 But the chief priests, taking the pieces of silver, said, “It is not lawful to put them into the treasury, since they are blood money.” 27:7 After conferring together, they used them to buy the potter’s field as a place to bury foreigners. 27:8 For this reason that field has been called the Field of  Blood to this day. 27:9 Then was fulfilled what had been spoken through the prophet Jeremiah, “And they took the thirty pieces of silver, the price of the one on whom a price had been set, on whom some of the people of Israel had set a price, 27:10 and they gave them for the potter’s field, as the Lord commanded me.”

27:19 While he was sitting on the judgment seat, his wife sent word to him, “Have nothing to do with that innocent man, for today I have suffered a great deal because of a dream about him.”

27:24 So when Pilate saw that he could do nothing, but rather that a riot was beginning, he took some water and washed his hands before the crowd, saying, “I am innocent of this man’s blood; see to it yourselves.” 27:25 Then the people as a whole answered, “His blood be on us and on our children!”

27:51 . . . The earth shook, and the rocks were split. 27:52 The tombs also were opened, and many bodies of the saints who had fallen asleep were raised. 27:53 After his resurrection they came out of the tombs and entered the holy city and appeared to many.

[27:62-66—The chief priests receive permission from Pilate to set a guard at Jesus’ tomb lest his disciples steal the body and claim that he has been raised up.] . . .28:2 And suddenly there was a great earthquake; for an angel of the Lord, descending from heaven, came and rolled back the stone and sat on it. 28:3 His appearance was like lightning, and his clothing white as snow. 28:4 For fear of him the guards shook and became like dead men. . . . 28:11 While they were going, some of the guard went into the city and told the chief priests everything that had happened. 28:12 After the priests had assembled with the elders, they devised  a plan to give a large sum of money to the soldiers, 28:13 telling them, “You must say, ‘His disciples came by night and stole him away while we were asleep.’ 28:14 If this comes to the governor’s ears, we will satisfy him and keep you out of trouble.” 28:15 So they took the money and did as they were directed. And this story is still told among the Jews to this day.

Notice how the theme of blood characterizes scenes 1 and 3 with Judas claiming he has betrayed “innocent blood” and hanging himself, with the chief priests buying the “Field of Blood,” with Pilate saying he is “innocent of this man’s blood,” and with the people saying “his blood be upon us and our children.” Money influences scenes 1 and 5 with Judas being paid “thirty pieces of silver,” and with “a large sum of money” financing the plot to cover up the resurrection. The paranormal emerges in scenes 2, 4, and 5  with Pilate’s wife’s eerie dream, with the earthquake and the dead being raised, and with the angel descending and rendering the guards immobile with fear. Scene 1 is particularly effective in tying together two of these themes with the penetrating phrase “blood money.”

What can we suggest as to the origins of this unusual material? It is likely that Matthew has drawn these sections of his gospel from a popular storytelling source. Such a source differs considerably from the most common gospel material. Most of the material which we have in the gospels is intended to serve the Church’s mission of evangelization. Narratives of Jesus’ ministry were told in such a way as to assist preachers in proclaiming the Good News. But storytelling material seems to have been shaped for a different purpose: to address peripheral questions which engaged the imagination of believers. Instead of focusing on faith or salvation, these stories examined marginal questions such as “Whatever happened to Judas?” and “What did Pilate’s wife think about Jesus?” When these early Christian storytellers composed their narratives, their primary concern was not what was the Good News but what would make a good story.

It is likely that the unique material in Matthew’s passion account originates from such a storytelling source. Its interest in blood, money, and the paranormal betrays its desire to grab your attention. It stoops to the most basic human impulses to do so. This low-brow, “Jerry-Springer,” dimension of Matthew’s passion account might surprise the pious reader. However, it demonstrates how the early Church was composed of real people who were moved by the same human instincts which influence us today.

The Dangers of Matthew’s Storytelling Source

When we interpret the material in Matthew’s storytelling source, we should be dubious concerning its historical accuracy. We believe that there is historical information in the gospels. However, storytelling material is not the place to find it. The aim of the storyteller was not to report objectively “what happened” but to narrate a story which would engage the listener. Embellishments were many. Where information was lacking, dramatic scenes could be created.

The death of Judas can be used to illustrate this point. The storytelling source in Matthew tells us that Judas “hanged himself” (Matt 27:5). The Book of Acts reports that Judas died when he fell and his bowels bust open (1:17). In the second century Papias, an early Father of the Church, reports that Judas died from pus and worms which flowed from every part of his body. The differences in these accounts indicate that the early Church did not really know how Judas died. But popular interest in the fate of the man who betrayed Jesus spurred storytellers to create a variety of narratives to show that he died a terrible death.

Distrusting the accuracy of Matthew’s storytelling source is especially important when we recognize another characteristic of this material: it is anti-Jewish. Scenes 1 and 5 associate the Jewish leadership with the lowest motives of bribing Judas and covering up the resurrection. With its famous “blood curse,” scene 3 has perhaps the most tragic history of any scene in the scriptures. It has fueled the belief that the Jewish people are responsible for Jesus’ death. Even though the Second Vatican Council clearly repudiated this understanding (Nostra Aetate, #4), millions of Christians continue to believe it. Understanding how Matt 27:24-25 is the work of a dramatic storyteller rather than an objective historian can assist us in avoiding the false conclusion that the Jewish people are responsible for Jesus’ blood.

The Benefits of Matthew’s Storytelling Source

What benefits can be drawn from this unique material in Matthew? Two possibilities come to mind. The emphasis on money confirms a saying of Jesus which Matthew has recorded earlier in his gospel: “You cannot serve God and wealth” (Matt 6:24). Matthew’s source associates money with corruption and warns us that if we make money our master, we lose our very selves.

The second benefit is connected with the theme of blood. Someone must claim responsibility for Jesus’ innocent blood. Judas does not want it. Neither do the temple authorities or Pilate. The story can only proceed when the people accept it. Once we stop reading the story as an historical account of who killed Jesus, a moral lesson emerges. Innocent blood cannot be shed without someone taking responsibility. Whenever innocent life is lost in our world because of poverty, greed, hatred, or indifference, we are not free to absolve ourselves from involvement. The gospel calls us to be the ones who say, “Let the blood be upon us.” We are responsible for each other.

Here then is a truth that can flow from Matthew’s low-brow popular source. It might be violent, biased, and sensationalistic. But it can still offer Good News.