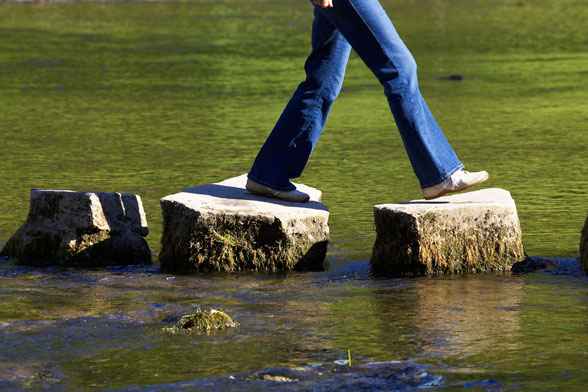 This is the second of three long narratives from the Gospel of John, which the church assigns for these Sundays of Lent. Like the one we heard last week, The Woman at the Well, the length of these stories allows us to see development in the characters who are in them. John uses these stories to reveal to us what decisions we need to make if we wish to encounter Christ.

In today’s gospel we hear that if we want to find Christ, we—like the man born blind—must be willing to take the next step. The gospel tells us that God has a plan for our lives, but we do not see that plan all at once. The only way in which that plan can unfold is if we are willing to take the next step as God gives us the light to see it. Look at the man in the gospel. He was blind from birth. What hope could he ever have of being able to see?  How easy it would have been for him to wallow in self-pity and hopelessness. How easy it would have been to pass by the next step that God wished to give him. When Jesus said “Go, wash in the pool of Siloam,” how easy it would have been for him to say, “Why? What difference will it make?  How can this change anything?” Refusing to comply would be understandable, but the man born blind took the next step. He went, he washed, and he came back able to see.

What this gospel is telling us is that we must resist the temptation to remain in self-pity and hopelessness. When a step to move is offered to us, we must be willing to take it. We might be convinced that we are unattractive and unlovable and we will never find anyone with whom to share our life. We might say, “What’s the use of asking someone out to a movie or of taking up the offer of a blind date?” But the gospel says to us; if something is offered to you, take it. You might find the love of your life. We might be searching for a job for months without any success, but the gospel says God has a plan, keep following up those leads. The next lead you choose to follow could lead to a job that will give you satisfaction for the rest of your life.

We must be willing to take the next step, and we must be willing to take it more than once. Again, look at the man in the gospel. No sooner did he take the step that allowed him to see, than another step was offered to him, a step for something more. Now he could see physically, but, even before he could absorb that miracle, he was offered a step to believe in Jesus, a step that would allow him to discover the light of the world. Through the debate with his neighbors and the Pharisees, he was posed with a choice, a choice about Jesus. He was asked to decide whether Jesus was a sinner or whether he was from God. How easy it would have been for the man who was once blind to sidestep such a decision. He was now able to see. Was not that enough? Why should he risk doing something more? Why should he stick his neck out and risk offending the authorities? He was able to see, surely there was nothing more than that he needed. How easy it would have been for him to remain in the blessing he had been given, rather than to reach out for the next good thing God wanted to offer. But the man in the gospel took the risk. He accepted Jesus as the one from God. Yes, he found himself in trouble, but he came to see Christ as the light of the world. Had he not taken that next step, he could have continued to see physically, but he would never have seen eternally. For the rest of his life, he could have seen the sky and the trees, but he would not see the face of God.

The gospel is telling us that even though we are satisfied, comfortable with where we are now, God has a plan for our lives, and God is calling us to more. It reminds us that life is about more than playing it safe. When the next step is offered, we should be willing to take it. God is calling us to new relationships, to new abilities, to new possibilities. The future holds a deeper relationship with God.

The story of the man born blind is a powerful story, for it reminds us that God has a plan for our life. But if we are ever to see that plan, we must be willing to take the next step. Like the man who was born blind, we must have the courage to step out of self-pity and hopelessness. We must have the courage to step out of comfort and the status quo. We are always free to sit down where we are right now and say, “This is it.  I will go no further.” But the gospel warns against that stagnation. It tells us that Jesus is leading us forward, inviting us to move into the future. Jesus is calling us so that step by step we may come to see him face to face.