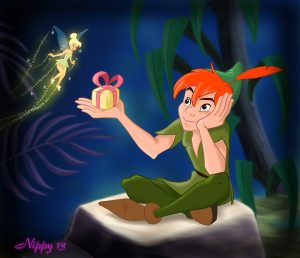 All of us have heard of Peter Pan and the magical place where he lived, called Never Never Land. It was a place where children never had to grow up or assume any responsibility, where they could do what they wanted to do whenever they chose to do it. Occasionally you’d have to deal with a pesky pirate, but all the needs and pleasures of life were magically available.

Could it be that our lifestyle has much in common with Peter Pan’s magic place? Could it be that America is in some sense a Never Never Land? It certainly seems so when we compare the way we live to the way that most of the people on this planet live. If you were living in Zambia, in Africa, you would wake up each morning and 86% of your friends and neighbors in that same country would be living under the poverty line. 86 %! Many without electricity or clean water or sewage, not to mention education or health care. In 1970, people who lived in the United States and in the first world had a standard of life that was 30 times better than those who were in the lowest 20% of the world’s population. Today, three decades later, that gap has doubled. Now we have a standard of living 60 times greater than the poorest people on the planet.

When you look at the size of that gap, do not the things which often concern us seem a bit childish, a bit self-indulgent: whether we should buy a new blouse or a pair of pants, when we have 30 pairs of pants or blouses in our closet and we have not worn many of them for years; whether we need a third car or a second home. If Jesus were suddenly to appear and ask us, “What are you talking about, what are you discussing with your broker or with your employer or with your spouse?” wouldn’t we be embarrassed to admit what was filling up our lives?

The disciples in today’s gospel were embarrassed when Jesus asked them such a question, for they were discussing which one among them was the greatest. Even as Jesus talked about his own necessary suffering and death, they were concerned about their own issues, their own indulgence. They were living in their own Never Never Land.

To the extent that we can identify with the disciples, what can be done? How can you and I live in our society as disciples of Christ in a culture that seeks to pamper us and indulge us? It is not an easy question. But I am not sure that our answer to it should be taken to the extreme. I am not sure that Jesus would ask most or any of us to give away all that we have and live in a hut in Africa. I certainly know I do not have the will or the courage to live the way most people in the world are forced to live. The issue, after all, is not that the comforts that we have are evil or bad, but that they become so problematic when compared to how little the rest of the world has.

So what can we do? Is there any realistic or practical way that we can hear the gospel and deal with these hard realities? Jesus shows a way. When the disciples are lost in their other worldly, self-indulgent thoughts, he takes a little child and places her in their midst and says, “Whoever welcomes one such child as this in my name, welcomes me.” Jesus is asking us to do one small thing this week that brings our thinking and our lifestyle more in conformity with reality? Can we take a few minutes just to realize how much we have and be thankful? Can we spend 30 minutes on the internet learning some of the hard facts about the distribution of wealth in our world and the many organizations that are trying to bridge the gap that separates us? Can we identify one vulnerable and hurting person in our family, in our neighborhood, at our workplace and give something to that person? What we might give need not be financial. We could give of our time and our compassion. Could we think of one small thing that would simplify our lifestyle, make one decision that would go against the American mantra of more and better and bigger?

I think this is what the gospel challenges us to do. Just as Jesus welcomed one small child, we are asked to take one small step that could lessen the gap between the life that we live and the life most of the world lives. I realize that even taking one step can be challenging. Having to face some of the real gaps, some of the real injustices in our world is uncomfortable, disconcerting to the way we would like to think the world is. But facing such hard realities is, after all, the difference between a child and an adult, between those who are worried only about their own life and needs and those who can serve the needs of others. It is the difference between someone who wants to play in Never Never Land and someone who is committed to build the Kingdom of God.