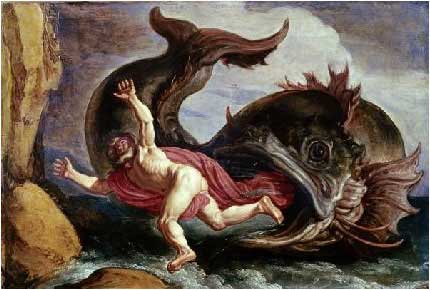 This homily was given on the eve of the US invasion of Iraq.

An old fisherman found himself at the pearly gates of heaven and was greeted by St. Peter. “Friend,” said Peter, “what are you doing here?”

“I want to get in,” said the fisherman. “I want to enter heaven.”

“I’m sorry,” said St. Peter, “but you can’t come in. You’ve simply told too many lies during your life.”

This caused the fisherman to fall on his knees and plead, “Have a heart Peter. Remember you were a fisherman once yourself.”

Fishermen and fish stories are notorious for exaggeration. Fish stories often disregard the truth. This, however, is not the case in the Book of Jonah, which is perhaps the most famous fish story of all time. Today’s first reading is from the Book of Jonah. It is the only time that the Book of Jonah appears in the Sunday lectionary, and we are at a great disadvantage because we have only a piece of this story. If we were to understand the message of the Book of Jonah, we would not find an exaggeration or a lie. We would discover an astounding revelation, an startling truth concerning God’s mercy.

The section that we just heard from the Book of Jonah describes Jonah’s preaching at Nineveh. It tells us that at his preaching the entire city listens to what he says, repents and believes in God. Therefore, God extends mercy to the city. In itself this small section seems like a straightforward account of a prophet preaching, people listening and repenting; but there is much more to the story of Jonah than this.

In order to really understand what this story of Jonah is about, we need to know who the Ninevites were. Nineveh was the capitol of the ancient empire of Assyria, and the Assyrians were the most violent and feared people in the ancient world. They were always seeking to extend their empire and they did so by whatever means available. They were violent and ruthless. The Assyrians destroyed the northern kingdom of Israel and almost captured Jerusalem. Therefore, all the people of the ancient world, but particularly the Jews, hated the Assyrians. So did Jonah. So when God asked Jonah to go and preach in Nineveh, Jonah did not  want to go. Jonah was afraid that his preaching might be the very excuse that God needed to forgive and show mercy to the Assyrians. Jonah did not want that to happen. He did not want his enemies to receive God’s mercy. Therefore, when God asks Jonah to go to Nineveh, he runs away. This is recounted in the first part of the Book of Jonah. Jonah books passage on a ship to Tarshish, trying to run away from God’s command. This is where the fish comes in. God sends a storm, Jonah ends up in the water, and the fish comes and swallows him.

God does not intend to hurt Jonah. God wants to stop Jonah, stop him from running away. So in the section we just heard today, Jonah goes, under duress, and preaches to the Assyrians. His worst fears are realized. His enemies repent and God shows them mercy. God forgives them despite their wicked ways. The conclusion of the Book of Jonah, which comes after today’s reading, is a prolonged conversation between God and Jonah in which God tries to convince Jonah not to be angry because mercy was shown to the Assyrians. God says to Jonah, “I know you are upset with me. I know that you are angry because I forgave and showed mercy to the Assyrians. But what do you expect me to do? There are over 120,000 people living in the great city of Nineveh and they need me as much as you do. I can’t forget them. I have to be concerned about them.”

It is clear that the Book of Jonah is a fable written by a Jew to tell us that we should never believe that God hates our enemies as we do. This inspired book from the Hebrew Bible reveals once and for all whose side God is on. It insists that God is on all sides. Or more correctly, God does not take sides in the numerous divisions and conflicts that so often divide humanity.

How is this ancient story of Jonah relevant to our situation? It speaks to us in a dramatically direct way. In an irony of history, the ancient city of Nineveh is located in what is today modern day Iraq. As you know, the United States is now in the process of confronting and possibly invading that very country. However, what the Book of Jonah tells us is clear. If we go to war with Iraq, we can never presume that God is on our side. War should always be a last resort. Even a justified war is always a tragedy, because in every war innocent men, women, and children will die. We can imagine God tolerating a war, but we should never imagine God endorsing a war. For whoever suffers in war, whoever dies in war, belongs to God. God does not love Jews more than Assyrians, or Americans more than Iraqi. God simply sees all people as God’s children.

So far from telling us a lie, this remarkable fish story from the Hebrew Bible reveals something true about our God. It tells us how God is always above any of the divisions or conflicts that divide us. It tells us why God always prefers peace to war, life to death, mercy over vengeance. Now I know that we live in a complicated world.  I believe that we must take steps to protect ourselves from those who would harm us. But as our country seeks a way to do this, we as believers must remember where our God stands. Jesus knew the message of the Book of Jonah. For Jesus said, “Blessed are the merciful for they will obtain mercy. Blessed are the peacemakers for they will be called children of God.” Those are words by which we are called to live.

1 thought on “Of Whales and War”