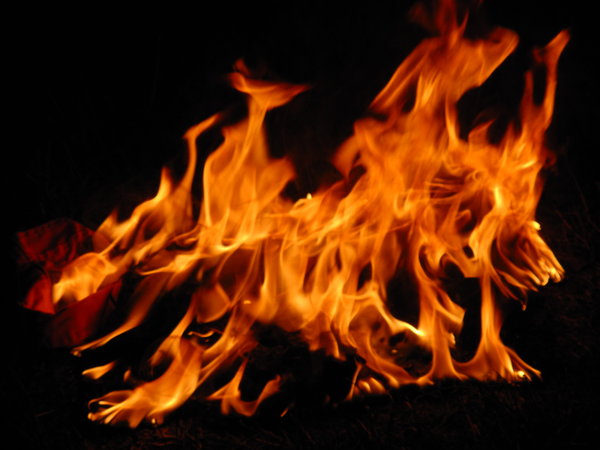 Today’s gospel includes what is probably the shortest miracle of Jesus’s ministry. It is only two verses. Jesus comes to Peter’s house and hears that Peter’s mother-in-law is in bed with a fever. He goes to her, grasps her by the hand, and lifts her up. She is cured and waits on them. This miracle is noteworthy because of its brevity.

But, there is also something else that sets it apart. The miracle does not tell us the disease from which Peter’s mother-in-law suffers. This is unusual. Usually miracle stories point out the problem quite specifically: a person is blind or lame or is a leper. But this story does not describe the disease, but only the symptom: she has a fever. What is the cause of the fever?  Does Peter’s mother-in-law have the flu? Is she fighting an infection? Does she have malaria? The text does not say.

This peculiarity becomes even more interesting when we examine the word which the Greek text uses for the fever. It is not a noun but a participle, a verbal form. It literally means she was in bed “burning up,” or she was in bed “on fire.” The question is in what sense was she on fire? Translators conclude that she was “on fire” because she had a fever. This is a logical and responsible translation. But what if we went in another direction. What if Peter’s mother-in-law was “burning up” not physically but emotionally? What if she was “on fire” not medically but personally? In other words, what if Peter’s mother-in-law was really upset about something?

What could she be upset about? You do not have to look far in Mark’s Gospel to discover a reason. Ten verses before Jesus comes to her house, her son-in law, Peter, together with his brother Andrew are catching fish at the sea of Galilee. Jesus comes along and says, “Follow me.” They leave their nets and follow him. Now, how do you imagine Peter’s decision would play out in the mind of his mother-in-law? “He did what! You know that the only reason that I agreed that my daughter could marry that guy was that he had a job. He knew how to catch fish. Now you are telling me he has left his nets and is going around Galilee with Jesus catching people! Good luck with that! How are you going to put food on the table catching people? How is he going to pay for my grandchildren’s education?” You could see how Peter’s mother-in-law could begin “to burn.” Even more so when after a few days she hears that at last Peter is at last returning home and is bringing this new Jesus friend with him, it would make sense for her to say, “I’m going to my room to lie down, and I don’t want to talk to anyone. I don’t want to face Peter or his new friend. They’re all out of their minds.”

Now if we imagine that Peter’s mother-in-law is “on fire” because of Peter’s decision to follow Jesus. The whole meaning of this story shifts. Peter’s mother-in-law becomes an example of those times in our lives when people we care for disappointed us. When a family member or a friend makes a decision that we do not understand, a decision that we think is foolish. Such a decision perplexes us, depresses us, and, sometimes enrages us. It sets us on fire. “He was always a boy with a head on his shoulders. Whatever moved him to invest his life savings with that crook?” “She was a girl with good judgment. What would move her to fall in love with that looser?”  “Why is my son so preoccupied with his job?” “Why does my friend drink so much?” “Why won’t my daughter just talk to me?”

When people we care for make decisions that disappoint us, it causes us pain. That can make this story of Peter’s mother-in-law a very important story for us. In this story Jesus becomes our healer. Look at what he does. As soon as he enters his house they tell him about Peter’s mother-in-law: “She’s gone to her room, and she’s not happy. She’s burning up.” What does Jesus do? He does not judge the woman. He does not become angry himself. He goes to her, takes her by the hand, and lifts her up. She changes. She begins to serve them. How does Jesus bring about this change? We are not told. But, it probably included him reminding her that as much as she loved her family, she could not run other people’s lives, that everyone had to make their own decisions. He probably also told her that God had a plan, and we cannot see that whole plan at once. It certainly involved the power of his presence. When she touched his hand and heard his words, she must have realized, “There’s something about this man that I trust. Maybe my son-in-law is not so crazy after all.” When people in our life disappoint us, we too must trust in Jesus. We must turn to him, take his hand, and ask him to remove our judgment and our anger.

Now, some people might not like this interpretation of the story of Peter’s mother-in-law. They might think that by seeing her fever as something emotional and personal rather than something physical, the significance of the miracle is reduced. But, I am not sure that is true. After all, aspirin can relieve a fever, but only the power of God can change a human heart.

1 thought on “Burning Up”