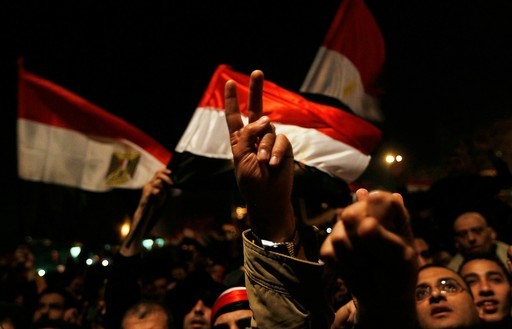 [This homily uses the Egyptian Revolution of 2011 as an example of effective non-violence. Even though the results of that revolution are soon to be undone by the election of another military dictator, the non-violent approach by which Mubarak was removed is still valid.]

If someone walked up to you and slapped you on the face, what would you do?

Well, probably after recovering from the shock, you would slap the person back.

Retaliation is the automatic human response. We can see it reflected in the way that people and even animals react with one another. The under lying implication is this: we must be able to defend ourselves. If someone comes towards us with violence we must be ready to push back with violence, because if we do not, the aggressor might get the upper hand and we could be revealed as cowardly or weak.

This basic principle of retribution is pervasive in our society. Ninety percent of our action films are based on some variation of it. Some person is wronged by someone else and finds a way to strike back, often with excessive violence. We struggle with this in our own lives trying to figure out how we should assert ourselves against those who would take advantage of us. We debate in our minds what we should say to our children about defending themselves against those at school who bully them. It is clear that the automatic response to violence is a response with violence in return.

This is what makes Jesus’ teaching in today’s gospel so difficult. Jesus tells us that we are to respond to violence with non-violence, that we are to offer no resistance to the one who does evil, that we are to turn the other cheek. It would be difficult to find a more challenging teaching in the entire Bible. But at least part of his strategy is clear. Jesus wants us as his disciples to be different. He wants us to stand out against the rest of society. We go back to what we heard two weeks ago where Jesus said, “You are the salt of the earth.” We are to have a distinctive flavor. We are not supposed to be just like everyone else. You can sense this at the end of today’s gospel where Jesus says that if we only love those who love us, what good is there in that. Everybody does that. We have to be different. We have to be distinctive.

This is fine and good. But why has Jesus made this stance of non-violence the litmus test to being a disciple? And how are we to live it? Many great minds throughout the centuries have tried to understand the words of Jesus. On one side you have great thinkers such as Francis of Assisi, Dietrich Bonhoefer, Ghandi, who see in this teaching of Jesus, the central message of his gospel that we are to take a non-violent stance against evil. On the other hand there is a group which believes that Jesus’ words are beautiful but not realistic. They assert that Jesus’ command to non-violence is aimed at another world, a world better than the world in which we live. To them Jesus has set an unobtainable goal that we cannot reach. And if we were to adopt the stance of non-violence, evil would get the upper hand and would in time crush us.

So how are we to understand these words of Jesus, these challenging and perhaps unrealistic commands? Before we decide, it might be useful to us to look at the experience of Egypt over the last number of weeks. The so-called Egyptian Revolution carries two characteristics that pertain to Jesus’ teaching. Many of us know that the change of government in Egypt was occasioned by a movement of Egyptian youth, who networked with one another using modern means of communication such as Facebook and twitter. But what people do not know as well, is that the youth movement had been organizing over a period of time. It had been re-grouping since failed effort in 2005. During that six year period, the organizers of the youth movement consciously adopted a posture of non-violence. They were influenced by the teaching of an American philosopher, who lives in Boston, by the name of Gene Sharp. Sharp argues that the most effective way to topple a repressive regime is by non-violence, because the minute that the protesters engage in violence, they provide an excuse for the regime to use violence in response under the guise of civil security. So the young protestors in Egypt adopted that non-violent stance.

When Mubarak sent out thugs to try to scare them with violent repression, they did not retaliate. They absorbed the attacks that came to them in the square. When they were attacked (some of them fatally), other protesters moved into their place. By choosing a non-violent response, they revealed the injustice of the regime, that would use violence against its own people. Mubarak lost the respect of the Egyptian populace, and the government fell.

The first thing that this reflection upon the Egyptian experience shows us is that non-violence is not a sign of weakness or cowardliness. In fact, it takes great strength and discipline to refuse to use violence when violence is directed against you. This challenges us to find the strength to turn the other cheek, the strength to refuse to retaliate. It invites us to believe that we can achieve our ends without contributing to the increasing cycle of violence in our world. The Egyptian experience challenges us to witness in our personal relationships, in our family relationships, in our relationships at school and work, that we are those who believe that we can move forward without manipulating others, without contributing to an already too violent world. Jesus calls us to be different enough to believe that non-violence has a place in our society.

Jesus calls us to be distinctive, to be different, to be salt for the earth by adopting a policy of non-violence. The first thing that the Egyptian experience confirms about that teaching is that non-violence is not the choice of cowards but the choice of heroes and saints. The second thing that it confirms is just as important. It is a truth that Mr. Mubarak now knows all too well: non-violence works.