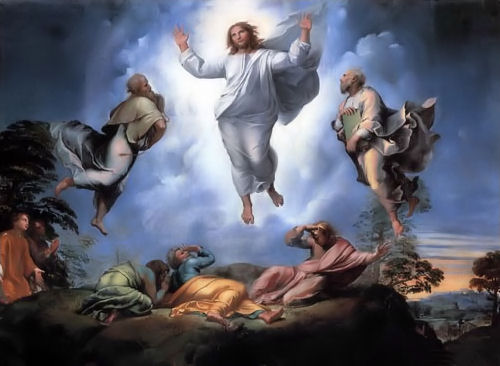 There are many perspectives through which we could view Jesus’ transfiguration. What did it mean to Jesus? How does it relate to other passages in the New Testament? How have later saints and theologians have reflected upon it? But what I would like to focus on today is what did the transfiguration of Jesus mean to his disciples?  And when we adopt this perspective, it becomes clear that in Jesus’ transfiguration the disciples saw something that they had never seen before. They saw a new dimension to Jesus, a new level of his glory and his power. They had walked with him; they had heard his teaching; they had eaten with him; but on the Mountain of Transfiguration they saw a truth that was greater than anything they had seen before.

Now this parable from the Taoist religion is over 2,000 years old. It is getting a lot of play recently because of the economic crisis. It is popular because it causes people who are facing a negative financial situation to recognize that positive outcomes are possible. Yes, many people are losing their jobs. But some of those people might find a new career in which they will be much happier. Many people are dealing with less income. But in trying to live with less they might learn more of the value of family and life. The Taoist parable names a truth. I can’t tell you how many times I talked with a  person dealing with cancer who testified that this persistent disease forces you not to worry about petty things but to live each day as fully and completely as you can. Good new, bad news? I have experiences where someone has had to face the sudden death of a friend and yet the shock of that loss has caused that person to put their own life in order and to live life with more thankfulness. Good news, bad news? We must not judge too quickly when bad things happen to us. The ultimate outcome will only be seen in time.

Yet, without denying the validity of this truth, the Christian gospel adds a whole other dimension to it. That dimension is the revelation of the transfiguration. Christians do not simply believe that bad things can lead to good. We also believe that there is a God, a God of power and glory who is working through the twists and turns of history and of our own lives in an effort to save us, in an effort to bring us to life. The Taoist parable tells us what life is like. Christ’s transfiguration reveals to us who God is like. God is at work in our lives bringing us to salvation. So when we have to face bad news in our life, it is important to listen both to the Taoist parable and to Christ’s transfiguration. First of all we should not over react to the bad news because we are not sure where in time that news will lead us. It might lead us to a good outcome. But secondly we must believe that God is involved in our lives. In faith we believe that the things that happen as we move from bad to good and good to bad are not random. They are not impersonal surges but outcomes guided by a God who is committed to us.

As we patiently wait to see how things will play out in our lives, it is important for us to follow the command that we heard in today’s gospel, “This is my beloved son. Listen to him.” We need to listen to Christ and to his teaching as we endure at the twists and turns of life. Even though it is not clear how the news of our lives will play out, we need to live as people who love our families and friends, who treat others with respect, and who care for the poor.  As we commit ourselves to live lives of integrity and wisdom we trust in a God who will not forget us. When the disciples saw Christ’s transfiguration, they witnessed something they had never seen before.  They saw something on an entirely new level, and so should we. When bad things happen to us, we must be patient and hopeful, realizing that good can turn to bad and then bad can turn to good again. But above all we must believe in a God who is powerful and real and who is working to save us. When things happen to us, is it good news or bad news? Who knows? Time will tell. But God will be faithful.