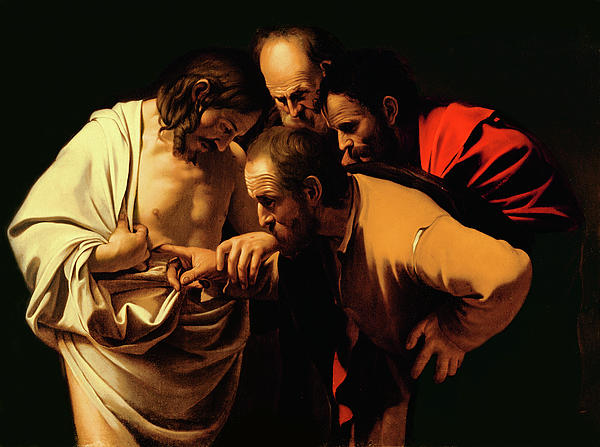 I would like to focus today on just one aspect of this dramatic passage from the Gospel of John: that curious invitation by Jesus to Thomas to take his finger and place it in the nail marks of Jesus’ hand and to take his hand and place it into the gash of Jesus’ side. Why would Thomas want to do this? Why would Jesus invite him to do it? What is the significance of this strange and gruesome action?

Now to answer that question we need to remember that each of the Gospels tells the story of Jesus in the context of the events of its own community. At the time that John’s Gospel was written there was a significant debate going on in the early church—a debate about who Jesus was and what our salvation entailed. There was a certain group of early Christians who did not believe that Jesus had a physical body. They did not believe that Jesus was human as we are human. These early Christians believed that Jesus was a spirit and that he only appeared to be human, he only seemed to have a physical body. Now tradition has called this group of early Christians “Docetists.” The word comes from the Greek word Dokeo which means “to appear” or “to seem.” The word is appropriate because this early Christian group believed that Jesus only appeared or seemed to have a human body. Once we realized that a debate over Jesus’ body was going on at the time of the writing of John’s Gospel, it becomes very likely that Jesus’ invitation to Thomas is the way that the Gospel chooses to disagree with the Docetists. By having Jesus ask Thomas to touch the wounds in his hands, the Gospel is emphasizing that Jesus had hands, that he had a physical body. By asking Thomas to put his hand in Jesus’ side, the Gospel is asserting that Jesus’ wounds were not just spiritual wounds, but were actual physical wounds in a body of flesh and blood.

Thus this invitation by Jesus to Thomas in the Gospel of John is the way this Gospel asserts that Jesus was not some elusive spirit but human as we are human, that Jesus had a physical body which shared in the glory of His resurrection.

Now why is this important? Why should we care that Jesus had a physical body? It is vitally important, not only because it tells us something about Jesus, but because it also tells us something about our salvation and our mission in following Jesus. You see the Docetists refused to believe that Jesus had a physical body because they were influenced by a certain trend in Greek thought that considered the body, and all physical things, all of creation, as valueless. In this Greek way of thinking the only thing which was valuable in the human person was that person’s spirit, the soul which all of us possess. Therefore for this Greek way of thinking salvation was escaping from the body, leaving creation and all physical things behind, and moving towards a state of pure spirit with God in God’s presence.

Now the Gospel of John and the majority of early Christians disagreed with this Greek way of thinking. They disagree with the Docetists. They insisted that creation is good and that physical things including our physical body have value. Therefore they insisted that Jesus had a physical body and his body was raised up on the third day. They insisted that we who follow Jesus will have our bodies raised up as well. Our salvation involves the physical world. Being saved does not simply mean going to heaven, even though at the time of our death our soul goes to be with God. Our mission is to bring God’s will into this physical world, to see that God’s kingdom comes to this earth. This is very important for all of us who would follow Christ, because it means the goal of our faith is not getting to heaven but bringing heaven to earth. We are called not to escape the evil of the world but in fact to change the world so that it would be less evil, less unjust.

We like Thomas are called touch Jesus’ glorified body as a reminder that every body, every person, all of creation is destined to share in the glory of God. We like Thomas are called to touch Jesus’ wounds as a reminder of how many real physical wounds continue in our world—wounds of sickness and violence, of prejudice and sexism, of poverty and war. Our mission is not to escape the world but to confront the evil of the world and to bring God’s love and kingdom into the lives of the flesh and blood brothers and sisters with whom we share this planet.

We do not believe that Jesus was simply a spirit, that he only seemed to have a physical body like ours. We believe that Jesus was human and that he was like us in all things but sin. We see God’s raising up Jesus from the grave as God’s commitment to heal the brokenness of our physical world, the actual human woundedness of all of us. We who follow Jesus commit ourselves to work until that day when God’s will be done on earth as it is in heaven.

1 thought on “A Body to Touch”