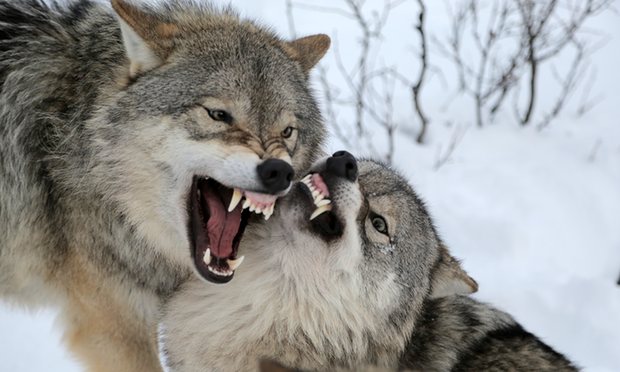 A research company was anxious to do an extensive study of wolves in one of our national parks. Wolves, however, are rather clever, and have no desire to cooperate with scientific studies. So, with the backing of a major donor, the company placed a bounty of $5000 on any wolf that could be safely captured for research. Two young college students, Tom and Dave, decided this would be a way to make their fortunes. They were familiar with the park because they had camped there frequently. For two weeks they scoured the park without much success. Then one night, exhausted, they retired to their sleeping bags under the stars, and fell asleep thinking of their potential wealth. In the middle of the night, Tom woke up and realized that he and Dave were surrounded by at least 50 wild wolves with glaring eyes and bared teeth. He nudged his companion. “Dave,” he said, “Wake up! We’re rich!”

Rich? Maybe. Doomed? For sure. Today’s parable also relates riches and death. In the parable, a rich man is busy making plans to store his wealth for the future. He decides to build bigger barns to hold what he owns. But all of his industrious planning is cut short by his sudden death. The parable does not deny the need to plan for the future, but it asks us to look at wealth from the ultimate perspective. The man in the parable is called a fool, not because he is stupid, but because he does not appreciate the true purpose of his wealth. All his crops, all that he has is a gift from God. That gift, of course, is meant to be used for his benefit, but not in an unlimited way. Once his own needs are met, his excess wealth should not be hoarded away for the future, but used. According to the gospel, it is to be used for the benefit of others.

This truth is not new to you. I think all of us are aware that God entrusts things to us to be used for the benefit of others. Yet many of us, like the man in the parable, go about from day to day without reflecting on what the purpose is for the gifts we have received. When God places money, or time, or ability into our hand, we are delighted. We begin planning how we can use these things for our own benefit. But how often do we think of the responsibility we have to use our gifts for the sake of others? Now this blindness might result in part from our culture which is always pushing us to accumulate excess wealth: more money, more friends, more possessions. Our culture persuades us that bigger is better, that growth is always desirable. How often do we ask ourselves, “Do I really need this? Shouldn’t some of this be given to someone else? What part of my excess wealth or talent or time should I give to someone who needs it?”

Clearly today’s parable might not be intended for everyone. There could be people here this morning who have no excess wealth, no excess time, no excess talent. But the people with no excess of gifts are few. Most of us need to listen to this parable as it reminds us that the excess gifts that we keep for ourselves are not an advantage, but a liability. The scriptures even use the image of a storehouse in heaven, a storehouse in which we can invest. We can place things in our heavenly storehouse each time we give away some of our resources here on earth. The image of the heavenly storehouse should be taken seriously, because at any time, just like in the parable, God could choose to call us home. When John D. Rockefeller died at the age of 98 at the beginning of the twentieth century, he was the wealthiest man in the world. A reporter who was assembling his obituary asked his chief aide, “Just how much did your boss leave behind?” The aide answered, “All of it.”

The same is true for us. We will leave behind whatever we do not invest above. And how sad would it be, at the time of our death, if our bank account and coffers here on earth were bulging full and our storehouse in heaven was empty and bare?