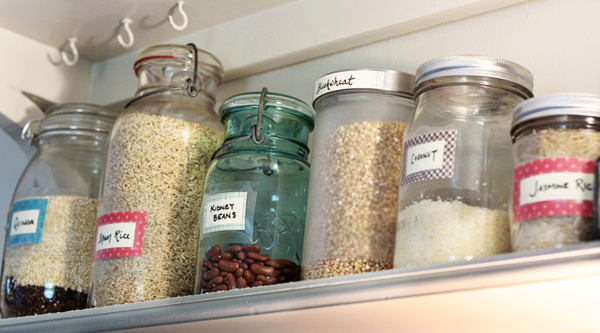 A religion teacher brought a clear glass jar into her classroom that was filled with a yellow substance. She asked the class, “What’s in this jar?” At first the children were not sure, but after examining it and smelling it and even tasting it, they realized that it was honey. “It’s honey,” the children said.

“Good,” said the teacher. Then she took a piece of white paper and wrapped it around the outside of the jar and fastened it with tape. She wrote on the paper: Vinegar. Holding up the jar again, she said, “Now what’s in this jar?”

“Honey,” all the children said.

“But the label says its vinegar.”

The teacher seemed satisfied and she put down the jar and looked directly at the class, “What you have learned about jars,” she said, “apply to people.”

In our world, people come to us with labels: labels of race, income, religion, and culture. But we would be amiss if we were to confuse the labels from the real people that we encounter. In fact, as followers of Christ, we are called to be very wary about what labels convey because they are often at odds with the real people we meet. Jesus deals with labels in today’s Gospel. He is in pagan territory and a Canaanite woman comes up to him. She is a Gentile, a non-Jew. In the culture of Jesus’ day, there was a prejudice against Gentiles, that they were unable to have a genuine relationship with God. For a while Jesus participates in this prejudice. He refuses to heal the woman’s child, saying that his ministry is only for the lost sheep of the House of Israel. But the woman persists, and in time Jesus recognizes her faith and heals her daughter.

As far as I can tell this is the only scene in the gospels in which Jesus changes his mind. Instead of relating to the woman with the label “Gentile,” he perceives her as a genuine woman of faith. What Jesus does in the Gospel, we are called to do. As followers of Jesus, we are asked to deal with people, not through the labels they bear, but as the people that they are.

For example, the label “Jew” still carries a negative association in many Christian circles. Catholics have worked diligently since the Second Vatican Council to repudiate the erroneous claim that Jews are responsible for Jesus’ death. We have tried to echo the powerful statement of today’s second reading that the gifts and call of God to the Jewish people are irrevocable, that they still remain the beloved, chosen people of God. Yet it is still easy to find slurs and jokes that characterize Jews as unbelievers, as money-grabbers, as people who would manipulate their own influence for their own benefit. To accept that prejudice is sinful and it is contrary to the Gospel. We who follow Christ are asked to deal with other people in truth, not according to the false and prejudicial labels, which are often found in our environment. If we claim to be believers, we must not say, “This is the way Jews are. This is the way Moslems are. This is the way alcoholics, or homosexuals or people of a different race are.” We must ask ourselves whether we are viewing others through our own real experience or through the prejudices that labels can convey. To allow our lives be directed by the half-truths of labels is a serious flaw. It places us in direct opposition to the design of God.

God makes people. We make labels. So instead of letting our lives be directed by the prejudices that a label can carry, we are obliged to discover and to respect the real people God has made.