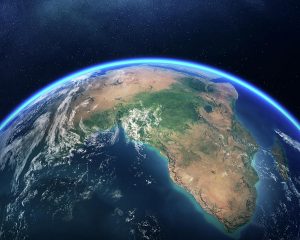 The challenge we face on this feast of Christ the King is to see the world as God sees it, to recognize the kind of kingdom over which Christ our King reigns. One thing is clear: the kingdom of Christ is very different from the world in which we now live. Jesus says to Pilate in today’s gospel, “My kingdom does not belong to this world.” When Jesus says this he is not saying his kingdom is in heaven or that he is going to leave this world behind. What he is saying is that in the kingdom of God this world will be changed, will be renewed, will be recreated. In Christ’s kingdom this world will be transformed because it will be freed from evil and sin. It will be the world as God sees it.

So how does God see the world? Modern technology may provide a glimpse of that world. We have all seen the photos of earth from space: a planet with blue oceans and continents viewed through swirling white clouds. Unlike the pictures of the world that we know from maps and globes, this picture from space does not distinguish one country from another by a different color. There are no borders or barriers visible, no walls or fences, only oceans, deserts, mountains, forests, and icecaps. The world is one planet on which one human family dwells. It is the world as God sees it.

Can you imagine if everyone could see the world as God sees it? It would be a world where peace triumphs over war, where people are liberated rather than exploited, where there is compassion and mercy for everyone. It would be a world that shuns violence and cares for the vulnerable first, a world of generosity over greed, a world of humility over arrogance, a world that embraces rather than excludes—the world as God sees it.

Now this is not the world we have today. Some would say that it is a world which could never be. But we cannot claim to be followers of Christ the King and at the same time disavow his vision for the world.

We are all aware of the recent disturbance in the Middle East between Israel and the Palestinians and the fragile cease fire that is now in place. I caught a radio program this week which offered a panel discussion on the situation. One of the women on the panel said that the standoff in the Middle East has been irresolvable for so long, and with violence on both sides, that it demonstrates that violence is not effective. She suggested that this continuing standoff demonstrates that war is becoming obsolete sooner than we think. Another member of the panel responded to her and said, “What world do you live in?”

That is the question for us today. What world do we live in? Do we live in a world in which we have acquiesced to limited hope and possibility because we have given up on God’s vision, because we do not recognize the kingdom that God is building? The challenge for us today is to stand in our faith that our God is recreating the world and calling us to participate. We are called to believe that God through Christ is establishing the kingdom. How Christ is going to lead us into that kingdom is not entirely clear. But this much is clear: If we are going to follow Christ, we have to begin by claiming his vision—we to see the world as God sees it.