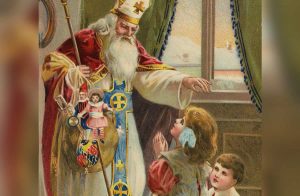 I would be willing to bet that you did not come to church this morning expecting to hear a homily on Santa Claus. But he is the fellow I would like to discuss with you today. I am convinced that if we understand the history of Santa Claus it will help us appreciate more deeply the meaning of the birth of Christ and apply that meaning to our lives.

The history of Santa Claus begins with a real historical person. His name was Nicholas, and he was a Christian, a believer. In fact he was a bishop. Nicholas was bishop of a town called Myra in Asia Minor, which is present day Turkey. It was a seaport on the Mediterranean coast. We know that Nicholas existed because in 325 the Great Council of Nicea took place. This council gave us the creed which we will profess in just a few moments, and Nicholas was numbered among the bishops that attended the council. The most significant thing we know about Nicholas was that he was committed to help people who were in desperate need. The most famous story of his providing such help has a direct connection to Santa Claus.

It seems there lived in Myra during the time of Nicholas a poor man who had three daughters. All three daughters were ready to be married. But they could not take this step because their father could not afford to provide them with a dowry. In the world at this time an unmarried woman would be disgraced, and it was the responsibility of the family to provide daughters with a sum of money to arrange a marriage. The poor man did not have the money and so his daughters were prevented from having their own family and children. It was a desperate situation. The man even considered selling one of his daughters into slavery so that he could raise money to marry off the other two. But he could not bring himself to do this. Nicholas heard of the situation. One night he went out quietly with a bag of gold which he threw into the window of the poor man’s house. The next morning when the man found the gold he was delighted and gave it to his eldest daughter for her dowry. But there were two more daughters and so on two subsequent nights Nicholas again went out and threw gold into the poor man’s window so that all of his daughters could enter married life.

Now you can see in this story the beginnings of Santa Claus. Remember that at this time of history people married much earlier than today. Marriages were usually arranged when a girl was about 12 years old. Therefore, the action of Nicholas coming at night and secretly providing gold for the children of the poor man eventually developed into the story of the kindly old man who brought gifts to all the children of the world. Now of course it took centuries for St. Nicholas to become Santa Claus. But you can hear still the connection in the names. You can hear the word “Saint” in the word “Santa” and of course “Claus” is the last syllable of Nicholas.

For most of history, Santa Nicholas came on his feast day, which is December 6th. He would come at night with his horse and his wagon full of gifts for the children. But in the early 1800’s the American writer Washington Irving re-wrote the story and said that Santa Nicholas drove his horse up onto the roof so he could come down the chimney. In 1821 the author Clement Clarke Moore wrote a famous poem in which he changed the story a bit more. Now instead of a horse and a wagon Santa Claus had a sleigh and reindeer, and instead of coming on his feast day, he came on the “Night before Christmas.” For most of history Santa Claus was dressed in green because he was a bishop and green was the episcopal color. But in 1931 the Coca Cola Company launched a famous ad in which Santa Claus was dressed in red (for obvious promotional reasons). The color stuck and Santa became “the man in the red suit.”

So how does this history of Santa Claus help us as believers? How does it guide us in our worship of Christ, the newborn King? It allows us to make a contrast. A comparison between St. Nicholas and Santa Claus. For there are two qualities of St. Nicholas that are largely absent in our culture’s perception of Santa Claus. I believe that if we can reclaim these two qualities, they will deepen our appreciation of what we celebrate today. Santa Claus is always connected with gifts and the magic of the season. St. Nicholas is connected with service and faith. Yes, Santa’s gift giving originated with St. Nicholas but St. Nicholas did not give gifts simply to bring a smile to children’s faces. He gave gifts in order to rescue those in desperate situations. Had Nicholas not recognized the need of that poor man and his daughters their lives would have been ruined. So the gift giving of Nicholas was not simply to make children happy. It was an act of service, an act to save those in need. And why did Nicholas act in that way? Not because he was a jolly old fellow. But because he was a person of faith. Nicholas was a believer. He understood the meaning of the feast we celebrate today: that God so loved the world that God sent God’s only son to be one of us—that Jesus was, in the words of the angel in today’s gospel, our Savior. Therefore, if God has saved us, then we in turn are called to save one another. If God has loved us, then our role is to do what Nicholas did, to serve others because of God’s goodness.

This then is what the history of Santa Claus provides for us on this feast of Christmas—the realization that we should celebrate this day in faith and service. In faith because we believe that God has become one of us and saved us from evil and sin. That faith makes us generous to one another because God was first generous to us. Out of God’s generosity we reach out in service. Moreover, our service should not be limited only to the people that are closest to us but should reach out to those truly in need: the poor, the lonely, the sick. Like Nicholas we are called to serve those who find themselves in desperate situations.

Now these two qualities of faith and service are truly at the heart of Christmas. But I am not sure that you could identify them in that “jolly old elf” that visited your house last night. Yet both faith and service can be found in the origins of Santa Claus. The gospel calls us to make faith and service a part of our holidays and a part of our lives. To do so would be a genuine blessing. Because if we could remember what God has done for us in becoming human and then choose to care for the least among us, I assure you it would be the best and surest way to a truly Merry Christmas.