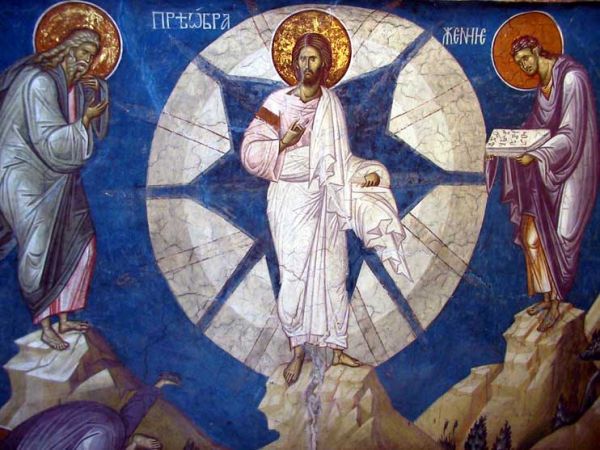 The transfiguration of Jesus was a revelation to the disciples and to us. But what did it reveal? As Jesus stood in glory between Moses and Elijah, the disciples saw things they had never seen before. But what did they see? The most frequent answer to this question is that they saw Jesus’ heavenly stature, that it was revealed to them that Jesus was divine. True as this answer is, it is not precise enough. Because the words which came to the disciples from the heavenly cloud indicate that what was revealed was not so much who Jesus is, as to whom Jesus is related.

The revelation of the transfiguration does not center on Jesus’ being, but on his connectedness to the Father.  The words that come from the cloud are, “This is my beloved Son “.   What they reveal is the intimate, unbreakable bond of love that exists between Jesus and the Father.  What they proclaim is that Jesus is more than a prophet, more than a teacher. Jesus is God’s beloved Son.  The words that come next are every bit as important:  “Listen to him.”  Why should we listen to him?  What should we listen to?  We should listen to him because if Jesus is in fact God’s beloved Son, then we who are baptized into Jesus are truly God’s beloved daughters and sons as well.

The mystery at the heart of the gospel is that through Christ we participate in the intimate union of love that exists between the Father and the Son.  This is the good news.  This is what we must hear and believe in above all else.  Why is it so important to hear it, to listen to it?  Because the minute we forget our status as beloved daughters and sons of God, the Good News evaporates.  The minute that we begin to substitute some other identity in place of our identity as beloved children of God, the Gospel vanishes.  I can testify that from the experience of over 30 years of priestly ministry, there is no more common or fatal mistake made by Christians than to forget this basic identity.

When we ignore our status as beloved daughters and sons and begin to see ourselves primarily as sinners, as victims, as unlovable, as flawed, as unworthy, the power of the gospel is lost to us.  Do we sin?  Are we flawed?  Is there a real sense that we are unworthy of the tremendous love that God showers on us?  Of course.  But despite all of those flaws, we remain chosen and beloved children of God.  It is only by claiming our true identity that we find the power to turn away from sin, the power to heal our hurts, the power to claim the dignity that God has so freely given us.

Richard Rohr, the spiritual writer and lecturer, once admitted that he was a rambunctious and mischievous child. There was in his neighborhood an elderly gentleman, Mr. Brown, who was very protective of his property.  He built a fence around his yard. He forbade all the children of the neighborhood to walk on his lawn and insisted that they stay away from his apple orchard which was his prize possession.  Well this demand of Mr. Brown was seen by Richard and his buddies as a challenge. One day they climbed over the fence and stole as many apples as they could from the orchard.  Mr. Brown spied them and came after them. They all escaped except Richard, who Mr. Brown collared and dragged back to the Rohr’s home. He buzzed the doorbell.  Mrs. Rohr answered. Mr. Brown immediately demanded, “Your son stole apples from my yard and he must be punished.”  Mrs. Rohr said, “Mr. Brown, I’m sorry.  I’ve told Richard over and over again to stay out of your yard.  He’s done what is wrong, and I will punish him.”

But Mr. Brown was not satisfied.  “Well what punishment will you give him?  I want you to tell me!  I want to hear right now!”  At this, Mrs. Rohr’s back straightened a bit, and she said, “Mr. Brown, I’ve told you that I will punish him.  I will take care of it.  Now have a good day.”  But Mr. Brown would not be satisfied.  “Mrs. Rohr,” he said, “I don’t think you are taking this seriously enough.  You are forgetting that Richard did something that was wrong.”  Mrs. Rohr said, “Mr. Brown, I told you I will take care of it.  I will punish him. But I cannot see Richard as you do. You are forgetting that Richard is my son.”

Richard Rohr insists that this is how God looks at us.  God never forgets that we are beloved daughters and sons.  For all of our faults and all of our failings, God continues to look at us with love.  This is what we must listen to.  This is what we must never forget. So when you become discouraged, when you find yourselves losing hope because of your faults, because of your inability to be as patient or as generous as you would like, because of your inclination to be judgmental of others, remember: God loves you with the same love that God loves Jesus.  When things are going wrong, when you cannot find a way out, when you are beginning to think that God is punishing you, remember: God is not about punishing you.  God is about loving you with a love that never ends.  When you become overwhelmed with grief, with sickness, with an emptiness that will not let you go, remember: God’s love for you is everlasting.

You are not one among many people.  Your dreams and your needs are always before God’s face.  Jesus himself assures you, “You are God’s favored daughter.  You are God’s beloved son.” Listen to him.

2 thoughts on “Our True Identity”