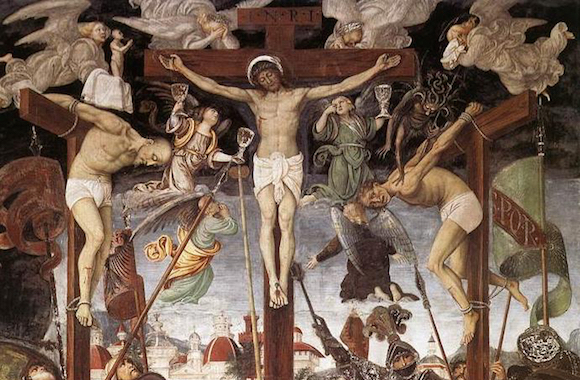 Today we conclude our liturgical year with The Feast of Christ the King. During the last year our gospels have generally been taken from the Gospel of Luke. Today’s gospel, the story the Good Thief, is an appropriate conclusion to the year because it is the climax of Luke’s Gospel. It perfectly summarizes Luke’s major concern. If we were to take all the material that is only found in Luke’s Gospel, it would pull in a clear direction. It would emphasize that God is the one who saves the lowly and the unworthy. This theme begins early in the gospel as we hear Mary’s Magnificat in which praises God as the one who lifts up the lowly. We see it again in Luke’s Parable of the Prodigal Son, when the unworthy son returns he is welcomed by his father’s embrace. We recognize it also in the story of the poor beggar Lazarus who is raised up to glory in the bosom of Abraham. Most recently we recognized it in the story of Zacchaeus. There Jesus insists that he is going to stay at Zacchaeus house even though Zacchaeus was a despised tax collector.

But there is no character in Luke’s gospel who more perfectly captures this theme than the criminal in today’s gospel. We know almost nothing about this man. We do not know his name. We do not know his age. We do not know whether he was married or single. The one thing we know is that he was unworthy. From his own lips he admits that he had committed crimes for which he is justly being punished. It would be hard to find a more hopeless character. He has committed crimes worthy of death. He has made a mess of his life. Now his life is coming to an end. We meet him literally in the last minutes of his life and it seems almost certain that there is no hope left. It is too late to turn things around, too late to ask for forgiveness, too late to make amends, too late to learn to love.

Yet in his desperation, he sees one last chance. It’s a long shot for sure, but he takes it. With his dying breath he asks the man hanging on the cross next to him to bless him. We do not know if this man knew anything about Jesus, whether he ever heard him preach, whether he even had any faith in him. But as his life draws to a close, he says, “Jesus, remember me when you come into your kingdom.” Then with a graciousness beyond all expectation, Jesus says to him, “Today you will be with me in paradise.” We hear from the very lips of Jesus who will be the first saint, who will be the first person to enter with Jesus into eternal glory. It is not who we expect. It is not St. Peter. It is not Jesus’ mother, Mary. It is not even someone like Zacchaeus who turns his life around. It is this convicted criminal who turns to Jesus only as his last hope.

You might be a person who for years has carried a hurt in your heart, a resentment against a family member or a friend that has alienated you from that person. That anger might be so much a part of you that you that you cannot imagine truly being able to forgive or to be forgiven. This gospel tells you it is not too late. Turn to Jesus and ask for mercy and believe that Jesus has the power to grant it.

You might be a person who for most of your life has struggled with a habit of sin. It might be prejudice or selfishness or some kind of addiction. As much as you have struggled against it, you have never been able to conquer it. Now seems that you can never change. It is not too late. Turn to Jesus and ask him to remember you. Believe that he has the power to save you.

There might be someone in your life who you love and who you worry about all the time. You worry because this person is depressed, has made a mess of things, or lives without hope. Despite your prayers and efforts, that person has never been able to find happiness. It is never too late. Believe in a God who seeks out the lost and forgotten and will save even those who have no hope.

If Jesus could save a convicted criminal in the last moments of life and make him the first to enter the Kingdom of Heaven, then none of us can limit God’s power to save and to heal us. So turn to Jesus. Call out his name. Believe that despite our desperation, our doubt, and our unworthiness, he wants to share life with us. He intends to welcome us into paradise.

1 thought on “It Is Never Too Late”