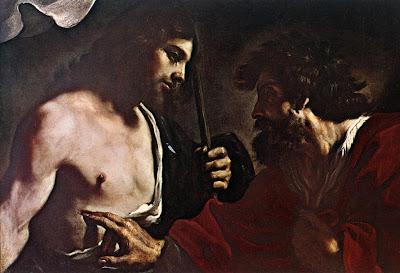 In today’s gospel, the risen Jesus not only comes to his disciples and offers them peace, he also commissions them to extend that peace to others. The text tells us that Jesus breathed on them and said, “Receive the Holy Spirit. Whose sins you forgive are forgiven and whose sins you retain are retained.” This is a powerful command to extend the forgiveness that comes from Christ’s resurrection to others. And it might even be deeper than it first sounds. That depends on how we translate the second part of the verse.

I think most of us know that the New Testament was written in Greek, and therefore we are dependent upon the skill and the insight of translators to convey the message in English. Sometimes in Greek, a particular phrase can be translated in a number of different ways. This is the case with the second part of Jesus’ command in today’s gospel. Our translation reads, “Whose sins you retain are retained,” but it is also possible to translate this verse, “Whoever you hold fast is held fast.” The verb here “to hold fast” is the same verb that Matthew uses in his resurrection account when the women at the tomb “hold fast” to the feet of the risen Christ. So “holding fast” means to embrace another in love.

When we look at this command of Jesus from this perspective, he is asking us to forgive others and then to hold them fast. He is asking us to do this communally, as a Church. The primary sacrament of forgiveness for the early Church and for us is the sacrament of baptism. When we are baptized into Christ Jesus, the bond of sin that can enslave us is broken. After baptism it is the responsibility of the Church to “hold fast” those who are baptized. Jesus commands us to hold on to one another, and this is both a privilege and a challenge. When someone is baptized into Christ that person becomes part of us, part of the body of Christ. We do not know who a child who is baptized will grow up to be. We will not know how many goals he will achieve or mistakes he will make. But it is our role as parents, as friends, as brothers and sisters in Christ, to hold on to him, to protect him and to love him as a member of the body of Christ.

Jesus commands the disciples on the night of the Resurrection, and commands us, to forgive one another and to hold on to one another. This of course is a challenge, and we often fall short. But each time we succeed in holding fast to a brother or sister who is weak, difficult, or broken, we succeed in reflecting the love of God—the love that will never let us go.