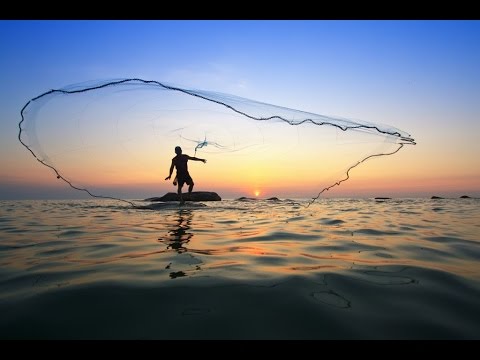 Peter and Andrew were fishermen. This is probably why when Jesus calls them in today’s gospel, he tells them that they will be fishing for people. To be honest, “fishing for people” is not one of Jesus’ better images. Many factors work against it. First of all, fishing is a predator-prey activity. Those who fish for sport love it. The fish, not so much.  If we were looking for an image to describe people being attracted to the gospel, we should be able to come up with one which does not place those so attracted on someone’s dinner plate. Add to this, that fishing carries negative associations in many of our English expressions. We “fish for a compliment.” We become “hooked on drugs” or some other dangerous practice. There is also the expression of “luring someone in” which carries its own negative connotation.

So what can we do to make Jesus’ image of “fishing for people” work in a way that is positive for our spiritual life? We can start by noting that fishing in first century Palestine was different than fishing is today. Peter and Andrew did not fish with a hook and a pole. As the gospel clearly says that they used nets which they threw into the sea. Once we include the net as part of the fishing image, its significance changes. It is no longer hooking an individual. It is now gathering things together. This idea of gathering is the usual way fishing is used in the Bible. Jeremiah talks about God as a fisherman who gathers the exiles from Babylon and returns them to their own country. In another place in the gospels, Jesus describes a net thrown into the sea, and all who are gathered by it enter the kingdom of God. So, when we understand the image of fishing in terms of the net, it becomes an invitation towards unity, a call to gather a community, an opportunity to build a church that will witness to the gospel.

This is certainly what is in Paul’s mind when he writes to the Corinthians in today’s second reading. He says, “I urge you my brothers and sisters that there be no divisions among you, but that you be united in the same mind, and in the same purpose.” Paul wants the Corinthians to see that unity is essential for Christ’s disciples. He insists that those who would follow Christ cannot be divided from one another. This is an important message for us because we live in a world that is so polarized that it is easy to become accepting and comfortable with divisions. “I’m not going to talk to him because he hurt my sister. I will not listen to her because she lied to me. I cannot socialize with that person because he does not accept climate change. I cannot interact with her because she is campaigning for Elizabeth Warren.” We use one issue after the other to divide ourselves from each other. We end up living in small, partisan cliques in which everyone thinks the same way.

Fishing for people calls us to unity. It asks us to cross over the walls that divide us and find common ground with those who think differently. Today’s gospel warns us that we should never become comfortable with being divided. That is not the way that God sees us, and it is not the way that God saves us. God saves us not by hooking us as an individual and reeling us into eternal life, but by gathering us all together into the kingdom, caught up in the saving net of God’s love.

2 thoughts on “Fishing for People”