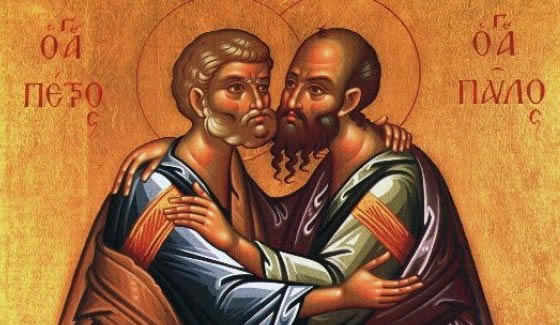 Today’s Feast of Sts. Peter and Paul is about discipleship and irony. It would be best if we examined each of these qualities in turn.

Today’s feast is about discipleship because Peter and Paul were among the first disciples of the Church. They were founding apostles who preached the Good News to Jews and Greeks alike. Their discipleship shows us what discipleship is about. When we examine the lives of these two great apostles, it becomes clear that discipleship places demands upon us. It calls us to a higher standard. Being a disciple is more than knowing a few things about Christ and coming to church on Sunday. It is about giving ourselves as deeply as we can to the service of Christ. Peter and Paul gave their very lives. They were martyrs for the faith. Now we probably will not be called to die for Christ, but we are called to live for him. And we are called to live in a way which is distinctive, a way which is different because we believe.

What is that difference like? A story will help here. This is a true story. It was broadcast this March on National Public Radio. A young man, Julio Diaz, is a social worker in New York. One evening coming home from work, as he exited the subway, a teenager approached him with a knife and demanded his wallet. Julio gave it over immediately, but as the boy walked away he said to him, “Since it’s a cold night and you’re going to be out all night robbing people, why don’t you take my coat as well?” The boy stopped, confused, “Why are you offering me this?” “Well, you’re willing to risk your freedom for a few bucks, so you must be in need. When you stopped me, I was just going to get some dinner, which I would still like to do. Would you like to join me?” Perhaps because he was confused or intrigued, the young man agreed. They went to a diner which Julio often frequented. He greeted everyone warmly and treated people with respect. “Why do you treat people so well?” the boy asked. “Weren’t you taught to treat people well?” Julio responded. “Yes I was. But I never saw people actually living that way.”  That led to a long conversation between the two of them. When the bill came, Julio said, “You’re going to have to pay for this because you have my wallet.” Without a second thought, the teenager gave his wallet back. “Thank you,” Julio said. “And now that I have money, I’d like to give you twenty dollars for that knife.” They agreed, and the deal was closed.

But we must not forget the irony. Both Peter and Paul were humble men, one a fisherman, the other a tent maker. Neither of them was adequately prepared to serve as the foundation for Christ’s Church. Moreover, they did not start out very well. Peter denied Christ. Paul persecuted the early Church. It is the highest irony that God would choose such weak and fallible people to begin the Church. But that irony is our hope. That irony reminds us that God does not choose us because we are so capable, but because God knows that we can become capable with God’s help. Our weaknesses can be overcome by God’s strength.

Discipleship is living according to a higher standard, being willing to be different because of the truth of the gospel. It is not easy to live in this way, but it is possible with God’s help. It is ironic that God would choose such weak people like Peter and Paul and us to be disciples, but that is what God does. In doing so, God removes any excuse. We cannot say, “It is impossible for me to live according to God’s standard.” God can make it possible. God will make it possible. With the same high expectation and irony that accompanied the call of Peter and Paul, God says to us, “Follow me.”

1 thought on “Discipleship and Irony”